Based on the newly announced Masterverse figures from mid March 2022, leaked and rumored figures, we engage in some Masterverse Wave Speculation to figure out what Wave 5, 6, and 7 will be and who will get the deluxe treatment!

Mattel had some massive announcements during the week of March 14th thru 18th, as we covered in a series of articles. In the weeks that followed we had multiple rumored leaks of even more additional figures to come in 2023, like the Zodac, Galactic Protector He-Man, Two-Bad leak or Frosta, Roboto, Stratos, Sorceress Evil Lyn leak from our friends at CANAL DOS ROSMINEIROS. Then last week, a leaked list emerged with some more character names on it. Links for those will be below. Well, given all that amazing, confirmed news and rumored leaks, we wanted to take stab at guess what the next possible wave of figures and deluxe figures might be! So, let’s get into it shall we?

The Wave 5 assortment has been confirmed to include Zodac, Catra and the Netflix Animated CGI He-Man and Skeletor! Read more in our article Masterverse Wave 5 Found on Target!

Below we can see all of the Masterverse Figures that Mattel revealed during their amazing 40th Anniversary week of reveals!!

Let’s first start out with Wave 6, as this is the Wave that we got the most rumored information on. An image shared on the CANAL DOS ROSMINEIROS Instagram page showed possible upcoming Masterverse Revelation and Pop figures. They posted the image and with Sorceress Evil Lyn, Roboto, Stratos, and Frosta last month, and we consider them to be a credible source, so assume that Sorceress Evil Lyn, Roboto, Stratos, and Frosta are coming down the line for Masterverse. 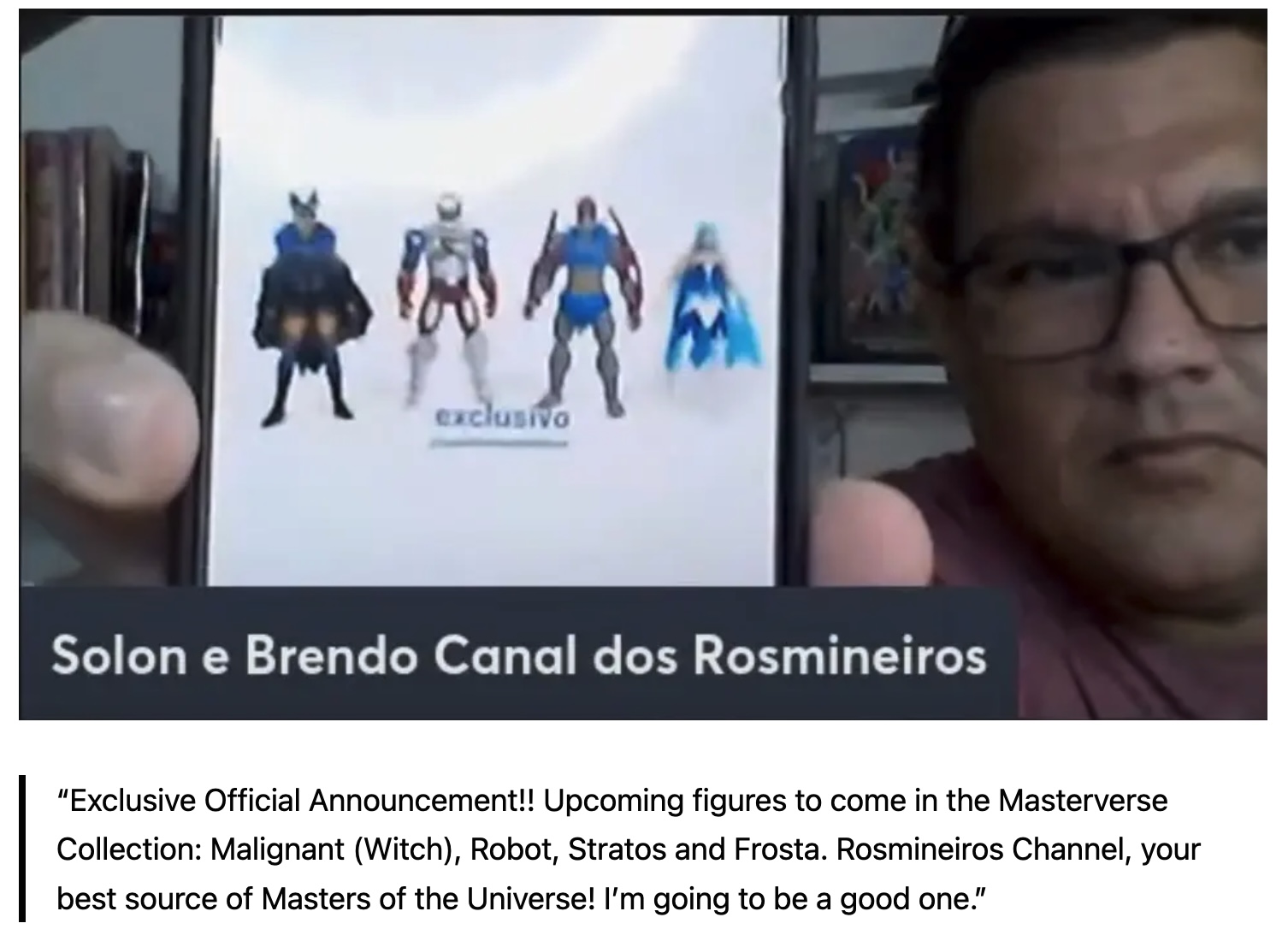 This lines up with what our Toy Habits source leaked to us back in February. This is a portion of the email that we received that lists out the Wave 6 Masterverse assortment and it consists of Sun Man, Battle Armor He-Man, Jitsu and Frosta.

So now 3 out of the 4 figures that were revealed during Mattel’s mid-March reveals plus the Canal Dos Rosmineiros leak makes for a complete Wave 6 rumored line up with all figures accounted for.

Wave 6 Figure assortment may include:

So, of the remaining figures, what will Waves 5, 7 and Deluxe figures look like? Now remember that when the Masterverse line was revealed back at Power Con 2021, the line consisted of 4 sublines:

So, on remaining 2 Waves and Deluxe figures, this is where Michael and Larry have differing directions, so we will explore each.

Let’s start out with Larry’s Wave 5 prediction and Larry was the first to provide his list and he prefaced, in the video for these theories, that he liked Michael’s list much better but Larry believes that Wave 5 will consist of the following figures listed above and here’s why. He wanted to split the figures up so you are not getting figures from the same sub-line in this wave. For example, you are not getting all Princess of Power or Horde in the first wave. He likes to mix up the sub-lines within the waves so you are getting a mix or Horde, Princess of Power, splitting the CGI characters up, and also including some Revelation figures. That said, let’s first start with CGI Skeletor and Larry thinks that collector’s will be the most excited for this figure (over CGI He-Man). Looking at the wave on the pegs, if you could ever find these at retail stores when they come out, you would have a good mix of packaging looks with representation from 3 out of the 4 sub-lines.

The wave 7 assortment came out of the process of the elimination from the deluxe figures that he selected. He feels that there are two hero’s and two villains and representation from the CGI line, Revelation, and Princess of Power. Mattel could go in a totally different direction where you have an entire wave dedicated to the Princess of Power. For example, you have She-Ra, Frosta, Catra, and Hordak in a single wave.

Larry believes Beast Man is almost certain to be a deluxe figure given all of the accessories he comes with but he did mention that it’s possible he can be packed in the New Eternia standard box. With respect to the the Sorceress Evil-Lyn, she could come packed with some extra accessories and have a soft goods treatment to her outfit. The 40th Anniversary He-Man feels like a deluxe treatment to a single carded figure but he hopes that the 40th Anniversary Masterverse treatment will be a new sub-line where we could see the line build out from the vintage looking figures (akin to Classics).

Michael believes that Wave 5 will consist of the CGI He-Man, Roboto, Stratos, and Catra as he thinks it is very possible to get Catra in Wave 5 since we are potentially getting Frosta in Wave 6. Roboto and Stratos could be could candidates for Wave 5 given they both appeared in the Masters of the Universe Revelation Netflix series and they are slow to create figures for this line. Michael recalls the days where he remembers when toy companies timed figure releases with the cartoons and there are a lot of figures left on the table from the series. We still have yet to see a Prince Adam from the line.

This wave would introduce two heroes and two villains to the line and Larry pointed out the that this particular wave is very “He” focused with He-Ro and He-Man and if you replace CGI Skeletor with the CGI He-Man, it would definitely tip the balance. That said, he went a different direction with Evil-Lyn and Mattel could pack her as a standard figure but he have yet to see the pack out she comes with. The 40th Anniversary He-Man feels like a standard release as shown on the last day of the Mattel reveals.

Given the plethora of weapons and accessories Hordak, Beast Man, and She-Ra are coming with, these figures feel like deluxe figures. If you look at the soft goods treatment all of the aforementioned figures are getting, you could see how they can be packed in that wide Masterverse Deluxe window display box. Beast Man, however, feels like a wild card as Viking He-Man and Barbarian Skeletor were standard releases so I could see Beast Man packed as a standard figure. If that happens, we could see an Evil-Lyn take his place as we have yet to see what she comes with.

No matter how these shake out, the Masterverse line is getting an infusion of some amazing figures. We have gotten some amazing announcements by Mattel and some juicy leaks as well from various sources, that all seem to line up. Do you have thoughts on the upcoming waves and which figures could be deluxe? Let us know by dropping us a comment! We would love to hear from you.

You can also check out our video on the Masterverse Wave speculation on our YouTube channel:

Mattel released exciting new drops on their Facebook & Instagram pages every day during the week of March 14th thru the 18th, and we covered it all here on ToyHabits.com! Below are links to all of those exciting announcements covered in depth! Mattel also said to be on the look-out for more announcements later this year. No release dates, nor order information have not been provided yet either. But as soon as we find out anything, we will let you know!

Be sure to check out our recent leaked and rumored figure reveals as they are a fun read (at least we think so lol!) Check out our articles and YouTube videos below.

Be In The Know!

You have successfully joined the Toy Habits subscriber list.

HAVE A HOT TIP? LET US KNOW!